Drawn by its proximity to commerce and numerous rail lines, William Walker Scranton determined to move the operation of the Lackawanna Iron and Steel Company from its birthplace in to the suburb of in 1899.  By the end of the century, he had obtained the needed land through the local services of John J. Albright.  The location chosen was a strip of waterfront south of the city of and on the western side of the town of .

A view of the mill, looking Southwest, ca. 1910.  The office building is clearly visible in the right foreground.

Construction of a massive new steel mill began during the summer of 1900 and, when the company reorganized in 1902 as the Lackawanna Steel Company, it was the largest independent steel company in the world.  One year earlier, as was welcoming the world to the Pan-American Exposition, construction began on a company town near the mill.  Though slow to start, by 1909 it became the City of .  Concurrent with the beginnings of what was to become was the construction of an elaborate building to hold the steel firm’s offices.  Located in the northeast corner of the mill complex, it was the design of architect L. C. Holden.  It is likely that William Scranton was already familiar with Holden’s work, as in 1896 the latter had also designed the original clubhouse for the Country Club of Scranton, of which W.W. Scranton was a director.

The main office building of the Lackawanna Iron and Steel Company, shortly after its construction.  The Beaux Arts influence on the building’s design is evident in its imposing presence, classical lines, pilasters, cornices and pediments.

Holden designed the Lackawanna Steel office building in the then-popular Beaux Arts style; a school also featured in the Pan-American Exposition.  This highly-ornamented, classical style aped that taught in L’Ecole de Beaux Arts in .  In the , it served as a perfect reflection of the wealth and status of the nation’s great industrialists.

The office building as it appears today (2009).  Note the later addition on the rear of the original building.  Though it has seen better days, the original majesty of the building remains.

In 1922, Lackawanna Steel was purchased by Bethlehem Steel.  Under the name, the complex continued to be central to the American steel industry.  During the Second World War, it was the largest steel mill in the world.  By the early 1980s, however, the plant had closed and the 21st Century finds the future of the old steel complex and its once-elaborate office building in doubt.  While the office building has been declared eligible for a National Register of Historic Places listing, the years of neglect have taken their toll.

mayor, Norman Polanski, Jr., has labeled the building “beyond repair” and the City of is seeking funding through Restore NY to have the building demolished.  Alternative solutions have been put forth, predictably some more practical than others.  One suggests a re-use of the entire complex along the lines of Arthur P. Ziegler Jr.’s project in .  If the building is, indeed, “beyond repair” in terms of a full restoration and re-use, perhaps a portion of its façade may be saved.  The incorporation of the Buffalo Gas Works façade [Last Look, WNY Heritage Spring 2002] into the new Blue Cross Blue Shield of WNY complex provides a recent local example of such a re-use.

Detail of the southern roof elevation, showing the elaborate copper dormer décor—as well as evidence of the building’s decline.

Lackawanna celebrates its centennial in 2009.  Such events provide the dual opportunity for contemplating what has been and what perhaps is yet to be.  The view towards the Lake Erie shoreline has certainly changed since 1909.  The steel is gone and wind turbines now dot the mill’s former landscape, but the building which housed the nerve center of the Lackawanna Steel Company survives.  Perhaps it is still possible to save at least a portion of this majestic reminder of the industry which gave birth—and a name—to the City of Lackawanna.

The full content is available in the Summer 2009 Issue.

The interest in the place where TR’s presidency began ultimately led to the preservation of the Wilcox Mansion.

Endnotes: More on Truman in Buffalo

A subscriber provides an additional anecdote about the vice president's visit to Buffalo, shortly before ascending to the Oval Office. 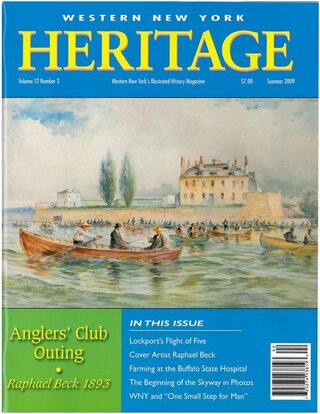 We remember a pillar of Western New York's heritage and philanthropic community.