The original marquee and upright sign of Shea's Buffalo as it looked in a night scene in 1926.

The invention of the motion picture in the 1890s revolutionized the entertainment habits of the American people for generations.  From the time of the earliest peepshows to the nickelodeon to the opulent movie palaces of the 1920s, the new medium swept across the nation like a prairie fire.  The City of Buffalo was no exception.  One of the earliest public exhibitions of the motion picture in this country took place in the Queen City.  Its promoter was Mitchell H. Mark, a longtime local resident, who would go on to become one of the leading developers of movie theaters in the United States.  In the mid-1890s, he opened a small picture theater known as the Edisonia in the Ellicott Square Building.  It was one of the first theaters of its kind in America.

With the production of Edwin S. Porter’s “The Great Train Robbery” in 1903, the nickelodeon made its appearance in cities and towns all over the country.  Running only about 10 minutes in length, the film could be shown over and over again in the course of a day, and profits soon began to pile up. Buffalo’s first nickelodeons sprang up rapidly along lower Main Street.  They were all meager storefront operations, but many of them survived as small movie theaters well into the 1950s.  Names like Keith’s, the Little Hippodrome and the Grand became household words to countless numbers of Buffalonians.  Some presented a mix of vaudeville and pictures before switching to complete film bills when vaudeville began to disappear as a popular form of entertainment.  Buffalo’s first real motion picture theater was probably Mitchell Mark’s Strand, built in 1913 and located on the site of the present M&T Plaza.  Seating around 1,200 patrons, it soon superceded the little nickelodeons with their seating capacity of only 50 to 100 chairs.

Nickel vaudeville at the Grand Theater (later Keith's) during the early 1900s.

With the advent of the feature film in 1912, the need for larger theaters was soon apparent.  Michael Shea met this need in 1914 with the opening of Shea’s Hippodrome, his first full-fledged motion picture theater, which was located on Main Street near Chippewa.  Shea was destined to become Buffalo’s premier showman.  Born in St. Catherines, Ontario, in 1859, he opened his first entertainment establishment, which he called Shea’s Music Hall, in 1882.  It was situated in what was known as the Arcade Block, the site of the present Brisbane Building at Main and Clinton streets, and patterned after the continental cafes of Europe.  Then came the Garden Theater on lower Pearl Street and finally Shea’s Court Street, now a vacant lot, which became the mecca of vaudeville for Buffalonians over a span of many years.

Shea’s Hippodrome was Michael Shea’s favorite theater.  Designed by the well-known Rochester theater architect, Leon Lempert, and similar in style to the Royal Alex in Toronto, it was actually a legitimate theater.  With some 2,000 seats and a 50-foot-deep stage, the Hippodrome boasted an escalator to carry patrons up to the balcony.  Though primarily a film house, it also played RKO vaudeville during the late 1920s and early 1930s, but it remained a first-run movie theater for over 50 years.  Not long before its demise, the Hippodrome was offered to the City of Buffalo by its out-of-town owner, who was willing to donate it to Studio Arena in exchange for the cancellation of its back taxes.  Complications ensued and the offer was declined.

The outbreak of the First World War in 1914, and America’s subsequent entrance into it three years later, brought a temporary halt to large movie theater construction.  But construction resumed as soon as the war had ended, and Buffalo’s first post-war film palace was Loew’s State built by Marcus Loew and opened in 1921.  Located on the east side of Main Street, near Mohawk, it later became famous as the Century.  Designed by Thomas Lamb, the foremost North American theater architect, the auditorium of Loew’s State had perhaps the most graceful lines of any downtown theater.  A magnificent marble stairway graced the Mohawk Street entrance.  The theater’s one disadvantage was its Main Street entrance, which joined the auditorium mid-way on the west side of the building.  After the Loew Corporation relinquished the theater in 1928, it passed through many different operators, including Shea, Dipson and United Artists managements, and for a long time was known as Shea’s Century, the Twentieth Century and finally just the Century.

The Mohawk Street entrance to Shea's Century, along with a view of the staircase and auditorium.  With its smooth and graceful lines designed by architect Thomas Lamb, this was perhaps the nicest auditorium of any of Buffalo's downtown theaters.

February 1922 saw the opening of the Lafayette Square Playhouse (soon to be known simply as the Lafayette Theater).  A large, 3,000-seat house, also designed by Leon Lempert, the Lafayette boasted the best acoustics and the deepest stage of any downtown theater. It was built by two Buffalo theatrical families, the Rosings and the Slotkins.  In its early years, it played Pantages vaudeville as well as films before becoming a straight film house.  The Lafayette was operated by A. Charles Hayman for many years and later by Basil Brothers.  It always suffered financially because it was the only downtown theater not situated on Main Street.

The Lafayette Theater as it looked in 1922 when it opened.  The Olympic Theater can be seen on the left.

The apex of Buffalo's movie palaces was reached in 1926 with the grand opening of Shea’s Buffalo.  Two years earlier, Michael Shea had been forced to sell out to Adolph Zukor and Paramount Pictures and content himself with merely being the operator of the theaters.  Built by Paramount-Publix Corporation, the theatrical arm of Paramount Pictures, and designed by the famous Chicago theater architects, C. W. and George Rapp, Shea’s Buffalo was the epitome of the movie palaces of the 1920s.  Its Italian marble walls and Czechoslovakian crystal chandeliers resemble a European opera house.  Its architectural style is French Renaissance in the Louis XIV style with a modern American adaptation.  Part of the interior, with its painted ceilings and gilded moldings, was designed by Tiffany Studios of New York.  The original grand drape, weighing almost 1,200 pounds, is still in use.  The theater boasts one of the three finest Wurlitzer organs in the world (many enthusiasts consider it the finest).  Shea’s Buffalo originally seated 3,600 and became the lynchpin of the Paramount-Shea chain of theaters.  It is the only one of the downtown theaters to survive and is today enjoying a new life as the city’s performing arts center.

(Left) Shea's Buffalo as it looked when it opened on January 16, 1926.  Note the baffles behind the members of the orchestra, which were designed to improve the theater's acoustics.  (Right) Original program from Shea's Buffalo from the week of April 5, 1926.

(Left) The Main Street facade of the Great Lakes Theater in the 1950s, when it was known as the Paramount Theater.

(Right) This sign appeared backstage at the Great Lakes Theater to warn performers that foul language would not be permitted in that theater.

The last of the downtown movie palaces to be built was William Fox’s Great Lakes, which opened in 1927.  With a Moorish décor, it was one of the last theaters to be designed by Leon Lempert.  The Great Lakes, like the Century, had a checkered history and ultimately ended up as a Shea house.  One of its most distinguishing features was its gracefully designed mezzanine.  Located only a few doors from Shea’s Buffalo, the Great Lakes probably suffered by comparison.

There was still one more Shea theater to appear in downtown Buffalo.  This was Shea’s Teck, which was carved within the shell of the old Shubert Teck Theater, a venerable legitimate house, located at Main and Edward streets.  Shea’s Teck was a much smaller theater than any of the others, seating about 1,400 on a one-floor plan.  It opened in 1946, right after the end of the Second World War.

An even small theater worth of mention was the Midtown, across the street from Shea’s Buffalo.  Opened in the same year as Shea’s Teck, it later became the Cinema and was one of Buffalo’s first art houses.  A delightfully intimate theater, it offered the best in foreign films.  It also offered its patrons free coffee in a demitasse in its tiny foyer.  Unfortunately, with the decline of downtown Buffalo in the 1960s and 1970s, the Cinema could not make it and ended up a B-grade and Kung Fu film house.  It was destroyed by fire in 1984.

When, in 1948, the United States Supreme Court issued a consent decree forcing the major motion picture companies to divest themselves of their theaters, many of Buffalo’s downtown houses changed hands.  Shea’s Buffalo and Shea’s Teck were taken over by the Loew Corporation and became Loew’s Buffalo and Loew’s Teck.  Shea’s Great Lakes and Shea’s Hippodrome were absorbed by United Paramount Theaters, a subsidiary of the American Broadcasting Company, and became known as the Paramount and Center, respectively.  But the die was already cast.  The threat of television was everywhere, and America’s entertainment habits were changing rapidly.  The great movie palaces suddenly became obsolete.  One by one, they were torn down.  The Lafayette went first, in 1962, and the Great Lakes (Paramount) followed three years later.  The Century lasted until 1979 and the dilapidated and run-down Hippodrome (Center) and Teck buildings until the early 1980s.  Even the conversion of the Center into three smaller theaters could not save it.  Only Shea’s Buffalo survived.

An era had ended.  But what a glorious era it was!  Just imagine—in the 1920s and 1930s, you could attend a performance at Shea’s Buffalo and see the following program:

The full content is available in the Winter 1999 Issue.

Twenty years ago, the former Niagara Falls High School was given new life as a regional center for the arts.

An 1897 Hotel and the Theater That Never Was

The Mohawk Hotel is one of the many buildings to be demolished for the preferred site of the convention center. Here is the story behind its construction.

The Rise, Decline and Renewal of Olmsted’s Elmwood District

Olmsted’s bicentennial provides an opportunity to examine the impact of his Buffalo park system on the development of one of the city’s neighborhoods. 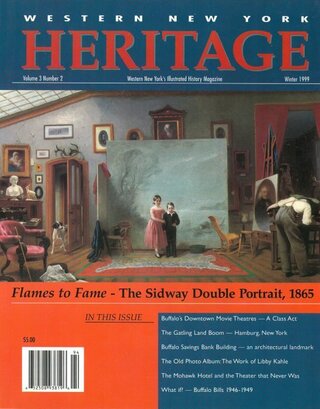 Through a partnership with Christopher Behrend Photography, we bring you this photography book showing the end result of the restoration of the Art Nouveau murals in the North Park Theatre.