The end of the Second World War signaled the beginning of the Cold War, and with it the need to defend the industry and population of the Niagara Frontier from a potential onslaught by Soviet bombers. Such an attack never occurred, but we examine the various measures that were taken to shield our region from nuclear obliteration.

The full content is available in the Spring 2016 Issue.

Cooling the Heat of Battle: Lockport’s Largest Employer Did Its Part in World War II

When the United States entered World War II, industry across the country transformed to meet the production needs of the war effort. Lockport’s Harrison Radiator Corporation provides a single local example of this nationwide phenomenon.

A chance find in a semi-related album yields some fascinating photos of a pioneering event in aviation history.

Following the Second World War, Dr. Walter Dornberger was one of many former Nazis who launched a second career in America’s space program.

It's a Trap! A Pair of Regional Milestones to Naval Aviation

Naval aviation was born 100 years ago this past January, and to mark the centennial of this important event, we highlight two of Western New York's many contributions. 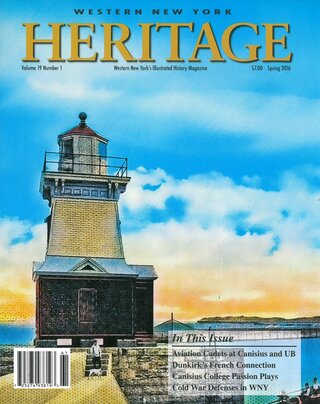 Early in his career, future governor William H. Seward had to institute a regime of palliative measures in order to quell the axe-wielding settlers' riot against the Holland Land Company when their farms were threatened with imminent foreclosure.

The Svengali and the Rolling Stone - A Brocton Tale

A religious zealot established a bizarre community in Chautauqua County, which included an eccentric and accomplished British politician and writer.