Old Photo Album: Batavia’s Route to Becoming a City: 11 Years in the Making

Known as “the birthplace of Western New York,” Batavia became a village on April 23, 1823. However, by the turn of the century, the aldermen – the village’s governing council – began to explore the idea of becoming a city.

The beginning of the 20th century found Batavia a growing community with several industrial centers moving into the area. Perhaps ironically, the idea to change the village charter to a city form of government actually arose in 1904 when the board of aldermen looked into paving the main streets. The following year special state legislation was passed that permitted the village to go ahead with the paving of Main and Jackson streets in the business district.

Less than two years passed before the matter of revising the village charter came up once more. In 1907, acting mayor, Charles Clifton Bradley, pointed to the forms of government of similar communities for inspiration for a new charter for Batavia. This idea generated significant interest and the charter revision process began again. An initial revision bill was introduced in the state legislature early in the winter of 1908-1909, but died in the Assembly. Nonetheless, every year thereafter, similar charter bills were introduced.

By 1914, the Batavia aldermen created a separate committee that sought to offer the state legislature a competing proposal to what was already annually introduced. Two weeks later, the so-called “Aldermen’s bill” was ready to go. Moving very quickly, the aldermen sought the necessary public endorsement of their proposed charter revision by way of a “straw vote.” This kicked off a war of words. Mayor Louis Wiard was criticized for the way the straw vote excluded the first proposed charter and the small-town politics took over.

Despite the problems ignited by the two proposed charters, the State Assembly passed the aldermen’s city charter bill on March 25, 1914 and it was immediately sent to the Senate. Since the final adjournment of the legislature was scheduled for the next day, it seemed unlikely that the bill would be reported out of the Senate in the current session. However, at 2:00 a.m., the bill was formally reported by the Senate Cities Committee and immediately passed. The Aldermen’s bill was signed into law on April 15, 1914 and Batavia would become New York’s 54th city on January 1, 1915.

As Batavia’s new charter was about to go into effect, a New Year’s ceremony was conducted on the north veranda of Ellicott Hall to mark the auspicious occasion. According to The Daily News, it was difficult to tell how many people filled the courthouse park and blocked the streets nearby. Estimates of the size of the crowd ranged “between 4,000 and 5,000 people,” and the streets were reportedly enlivened with “sounds of merriment” as volunteer firemen drum corps marched up and down the streets and citizens welcomed the new year and a new status for the community.

“The bell of St. Joseph’s church was the first to ring out,” The Daily News reported. “The Harvester Works whistle started up, then followed the bell of the Presbyterian church, the shrill fire whistle at the waterworks, and thereafter was an indistinguishable roar. Aerial bombs exploded in rapid succession until 21 had burst above the heads of the crowd….Automobile horns were sounded on many cars in the streets. Through it all the Genesee Band…played on the veranda steps.”

In 2015, the city remembers its centennial with a yearlong series of celebrations. The following pages feature images of Batavia in the early 20th century, when these changes in government were taking place.

(All images courtesy of the Genesee County History Department except where noted.)

Looking north from the corner of Ellicott and Jackson Streets around 1900. Note the pipe connected to the fire hydrant near the sidewalk, which was used to keep the dust down on the dirt roads.

When this photo of State Street was taken in 1900, horses still outnumbered automobiles in the village. Farmers’ sheds along the street provided shelter for horses while their owners shopped on nearby Main Street.

The idea to revise Batavia’s charter first arose when the Board of Aldermen sought to bring the community into the 20th century by paving its streets, starting with Main (pictured) and Jackson.

The corner of Main and Jackson Streets has long been the center of the business district in Batavia. This ca. 1910 image shows the Doty building, which housed the Farmer’s Bank.

The east side of Jackson Street in 1910, looking much as it does today. Note the unpaved street that kicked off Batavia’s charter revision process.

The Batavia Hospital was erected in 1902 on the site where United Memorial Medical Center stands today. Prior to the hospital’s construction, Batavians relied on individual physicians for medical treatments.

Joseph Ellicott built Ellicott Hall in 1802 to serve as the courthouse for Genesee County. In 1915, the new city celebrations took place just outside of the hall, with the Hooks drum corps – made up of the firemen – providing some of the music for the event.

Hotel Richmond sat on the corner of Main and Court Streets and was the leading hotel between Buffalo and Rochester until it was razed during urban renewal in 1961.

Beautiful mansions once lined both sides of Main Street. The Elks Club (left) occupied the home owned by George Wiard, who also owned Wiard Plow Company, a long-running business in Batavia. The home on the right was previously the residence of Dr. H.S. Hutchins.

This photo shows the north side of Main Street in the 1920s, when Batavia was in its prime. The winter view is likely similar to the way the community looked when Batavians celebrated the new year and new city charter in 1915.

The full content is available in the Fall 2015 Issue.

Old Photo Album: WNY From Above

Join us on an aerial tour of all eight counties of Western New York.

Back in April, we asked readers to share their memories, photos and artifacts with us-- and you delivered!

The streetcar line down Delaware Avenue to the city of Tonawanda helped shape Buffalo's first suburb in the late 19th century. This series of photos showcases what life was like in the early days of Kenmore. 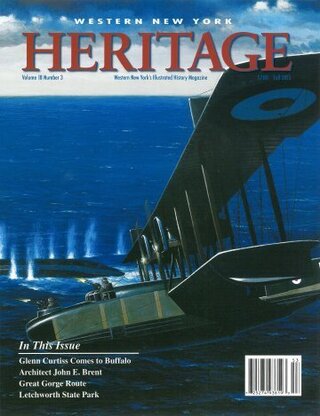 Facsimile edition of the 1915 Beautiful Homes of Buffalo showcasing homes built for movers and shakers of a vibrant city.