West Delavan Ave. is closed at the corner of Parkdale Ave, September 16, 1936.  Note the PWA sign attached to the telephone pole, next to the stop sign.  The sewer project in Buffalo was evidently labeled project “N.Y. 1034.R” by the Public Works Administration.  The family sitting on their porch at right has had to make do with a temporary sidewalk made of wooden planks.

The current administration’s recent efforts to stimulate the economy through investments in the country’s infrastructure are certainly nothing new.  Perhaps the most famous of previous efforts to do so occurred during Franklin D. Roosevelt’s “New Deal.”  The largest of these efforts were undertaken by the Public Works Administration.

Created by the National Recovery Act in 1933, the PWA focused on the construction of large-scale public works.  Between 1933 and 1939 it funded more than 34,000 projects, spending over $6 billion.  Often confused with the WPA (Works Progress Administration), the Public Works Administration did not hire unemployed workers.  Instead, it attempted to stimulate the economy by contracting with existing private firms, who did their own hiring or utilized existing labor.  Even so, most historians agree that the PWA and other programs failed to bring the country back to pre-1929 levels, and that only the Second World War brought full economic recovery.

Sewer construction at the corner of Abbott Road and Boone Street, taken February 17, 1937.  The photo is taken in a southerly direction.  Note again the prominent PWA sign, as well as the Baby Ruth candy advertisement on the building at left.

Large amounts of New Deal money were not spent in Buffalo until about 1935, but between that year and 1937 over $45 million had been spent, employing over 75,000 people.  By far the largest single expenditure in the PWA relief money allocated to Buffalo was for the construction of a new sewer.  The photo collection of the Western New York Heritage Press contains a large number of photographs, documenting this 15-million-dollar project.  One may argue that there is nothing aesthetically pleasing about pictures of sewer work. In their efforts to document the project, however, the photographers also captured images of city streets lined with beautiful elms before Dutch Elm disease wiped them out.  Also appearing are countless other details; vintage automobiles, machinery and advertisements, shops long since closed and candid moments of Buffalo citizens going about their daily lives.

We hope you will enjoy this sampling of our large collection, documenting not only the work done as part of this extensive project, but also the street scapes of yesteryear.

Work being done on Bailey Avenue, looking north from Seneca Street, August 5, 1937.  Just visible to the left of the PWA sign is a delivery vehicle from Colonial Bakery.

Another look at the work done along Bailey Avenue, this time looking south from Littell Avenue, on the same date as the previous image.  Perhaps the free entertainment provided by the work made up for the inconvenience for the two people sitting on the porch at upper left.

The work done along Masten Avenue seems to be some of the best documented in our collection.  Here is a view of the intersection of Masten and Northland Avenue.  While the work has yet to begin, the barricades and signs are being erected.  Whitbeck’s Central Star Laundry is on the left of the street.  June 25, 1936.

What a difference three weeks makes!  Here is another photo of the same intersection, taken on July 14, 1936.  It is hard to imagine the disruption to traffic that such a huge undertaking would create today.

The trenching machine works its way down Masten Avenue in this view looking south from the intersection at Northampton on August 3, 1936.  Note the sign for Schwegel’s Baby Chick Hatchery on the far right.

The area around the intersection of Masten Avenue and Glenwood Avenue was frequently photographed when the sewer project visited the area during the summer and fall of 1936.  Again, we see the PWA sign with the familiar project number assigned to Buffalo’s sewers.  The photo was taken on May 13, 1936.

A southerly look down Masten Avenue from the intersection with Glenwood, June 22, 1936, showing the trencher at work.  Of interest are the various feeder pipes which lie in the center of the road and along both curbs.

A view looking north along Masten, taken from nearly the same location as the previous image and on the same date.  The two houses on the north side of the intersection are some of the few still standing from the period in this neighborhood today.

The work finished, a photographer documented the intersection of Masten and Glenwood one last time, on December 16, 1936.  One cannot help but wonder about the camera’s shutter speed when looking at the “ghost car” in the upper center of the photo.  Note that the sign for Norm Tyrrel’s Cash and Carry Ice business (upper left) now has an “Open for Business” sign not present in the previous photo from June.

The full content is available in the Spring 2010 Issue.

We remember this pillar of Buffalo’s African American community with a series of personal recollections.

Back in April, we asked readers to share their memories, photos and artifacts with us-- and you delivered!

The streetcar line down Delaware Avenue to the city of Tonawanda helped shape Buffalo's first suburb in the late 19th century. This series of photos showcases what life was like in the early days of Kenmore. 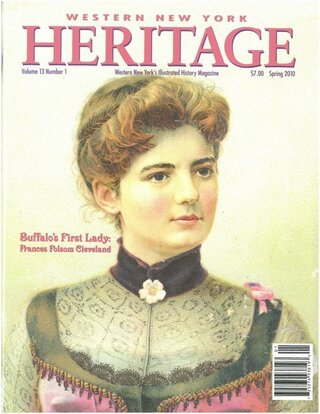