Buffalo's rapid growth in the late 19th Century led many residents to seek homes away from the city’s noise, pollution and newer immigrant peoples. As streetcar lines reached out to nearby communities such as Tonawanda, entrepreneurs saw an opportunity to develop new real estate that would attract city residents to largely rural towns on the periphery of the burgeoning city.

In 1894, a new streetcar line down Delaware Avenue connected Tonawanda with downtown Buffalo.  Thus it became feasible to live away from the crowded city in a semi-rural atmosphere, yet easily travel to jobs and shopping in Buffalo. Sensing the opportunities that would come with the streetcar expansion, realtor Louis Phillip Adolph Eberhardt bought part of the Mang farm just north of the city and began developing it into lots for new residents.

LPA, as he was known, built his first house just inside the Town of Tonawanda in 1889 but it soon burned down because the hamlet had no fire protection. He and his brother Louis then built stone homes across Delaware Avenue for $15,000 each. Louis’ home still stands today. Another realtor, Myron Phelps, built a more modest home for $4500, also on Delaware. Both Eberhardt and Phelps bought up land from local farmers and subdivided it into lots. They then brought people out from the city via Frank Stillwell’s horse-drawn omnibus to purchase their homestead. A few side streets were opened and new houses built, but few services were available at first.

Because the little hamlet lacked infrastructure it was incorporated as the Village of Kenmore in 1899 with the ability to provide paved streets, water and sewer lines, street lights and fire protection. The following images illustrate growth in the young village.

The family farmhouse on the Mang property when LPA Eberhardt purchased acreage from Frank and Elizabeth Mang.  Eberhardt paid $300 per acre and subdivided the land into lots for homes, thus establishing the roots for the Village of Kenmore in 1888.  New residents could purchase desirable lots on side streets near Delaware Avenue for as little as $225.

Delaware Avenue, looking south, about 1926.  Prominent is the streetcar track, the extension of which prompted LPA Eberhardt to develop residential lots north of the City of Buffalo.  In this image, St. Paul’s R.C. Church is on the right, and a new business block has opened between Victoria Avenue and Lincoln Blvd.  The village is decorated for an Independence Day parade.

Myron Phelps home and barn on Delaware Avenue at Tremaine.  This was the village’s second suburban home, erected in 1890.  It served as the first meeting place for Methodists in 1891.  The wooden sidewalks served for over a decade before being replaced.

West Tremaine Avenue (Parkwood) before any grading was done to the street.  A wooden sidewalk is in place on the north side and various houses in the $3,000-4,000 range are under construction.  The Methodist-Episcopal Church steeple on Delaware Avenue can be seen in the distance.

East Tremaine Avenue, looking west from Rowley Avenue, before that block was paved.  The village was growing rapidly, as shown by the many homes under construction.  Note the newly planted trees.  The boy and girl in the right foreground are picking wildflowers, which were widespread in the tall grasses of the yet-unmown lawns.

Mang Avenue was the single brick-paved residential street for one block.  It was named after the Mang family, from whom LPA Eberhardt purchased the land.  The Mang homestead partially shows at far right.  It was divided and moved down the street when a bank was built at that location.  Note the streetcar tracks on brick-paved Delaware Avenue.

St. Paul’s Roman Catholic Church was founded in 1897 at the corner of Delaware and Victoria avenues, on three acres donated by the Mang and Keller families.  The rectory was added in 1910.  The streetcar line to Tonawanda was put through the village in 1894 when Delaware was paved with brick.  Within a decade it became a speedway for newfangled automobiles.

Kenmore Village and Fire Hall, erected in 1903.  Hand-drawn fire equipment for hose companies, chemical engine and hook and ladder were housed here.  Previously the equipment was stored in local farmers’ barns.  The left tower was used to dry hoses, the right tower would have a fire bell.

Kenmore’s Alert Host Company was formed in 1903.  Here they are shown in front of the Village and Fire Hall, ready for a parade.  The right-hand tower was raised in 1904 and housed a fire bell.  Previously the Kenmore Methodist-Episcopal Church bell served as a fire alarm.

This 1919 photo shows the hand-pulled hook and ladder that was used in Kenmore’s early history.  In 1922 it was attached to a Model T chassis and served another five years.  In the background is the former Winfield Mang store and tavern, which was moved to Warren Avenue when the Eberhardt mansions were constructed in 1893.

Kenmore volunteers on Tremaine Avenue preparing for a parade, ca. 1905.  Note the steam-powered, hand-drawn fire wagons at the rear.  Most streets were still unpaved.

An early 20th century view of three of the original houses on West Hazeltine Avenue, numbers 40, 46 and 54.  All three stand today, though altered in appearance.  The conical roof tower on number 54 remains, but the ornamentation has largely been removed or covered.  Note that the street already has curbs, sidewalks, gas street lamps and fire hydrants.  Amenities such as these were made easier by the incorporation of the village in 1899.

Kenmore’s second Village Hall and the village triangle where Delaware Avenue and Delaware Road meet.  This 1892 school became the village hall in 1910 when the new Kenmore High School was built.  The building was replaced by the present Municipal Building in 1936.

The first Kenmore Presbyterian Church before it was raised and a basement put underneath in 1911.

The Kenmore Drum Corps, one of several community organizations that developed in the young village.  The marched in parades, both in Kenmore and in other Western New York communities.

The full content is available in the Summer 2017 Issue.

We remember this pillar of Buffalo’s African American community with a series of personal recollections.

Old Photo Album: WNY From Above

Join us on an aerial tour of all eight counties of Western New York.

A reader-submitted photo sheds light on an historic corner and its roots in the early history of Buffalo. 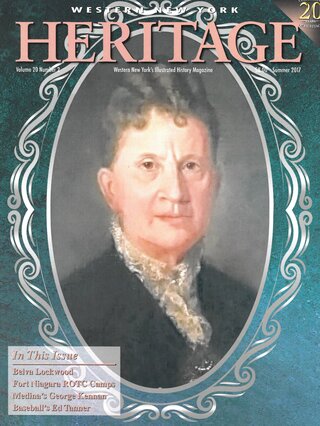 Local historian John Percy offers up a collection of memories and family photos from when the leviathan rolled through town in 1939.

Glezen Fillmore was more than your everyday minister. Braving the untamed wilderness of Western New York in the 19th century, not even wolves were enough to stop Fillmore from delivering his message.