History is a rich, complex tapestry comprised of people, memories, architecture, politics, religion, culture and many other elements. As such, however, it is important to appreciate that our understanding of history is always reliant on context.

For example, schoolchildren are taught that “President Lincoln freed the slaves.” Contextually, however, we know that the 1863 Emancipation Proclamation freed slaves only in those states “in rebellion against the United States,” and thus made no real difference until 1865, when the Union Army occupied the last Confederate state and informed enslaved African Americans in Texas of their freedom. Still, it took the 13th Amendment in 1865 to legally eliminate slavery from the whole of the United States.

History involves everyone, everywhere, everywhen. We honor it, and those who came before us, by knowing the details. Summer 2022 is full of historic observances that are sometimes overlooked. Because of the importance of history in defining our past, present and future, it is vital that we remember our shared past as accurately, and completely, as possible.

Pride Month: This celebration honors the riots in response to a police raid on the Stonewall Inn, a gay club. The raid led to six days of protests in New York City beginning June 28, 1969. It was a key moment in the long fight for LGBTQ rights in America.

June 6 (1944) - D-Day: Among the thousands of soldiers, sailors and airmen who took part in the invasion of Normandy, France, were many Western New Yorkers.  Many of them would give their lives for the liberation of Europe in the coming days.

June 14 - Family History Day: Let your elders regale you with tales of their youth. Make sure their stories are never forgotten.

June 14 (1777) - Flag Day: Buffalo teacher Sara Hinson began the tradition of honoring the day the Continental Congress approved the original design of the American flag. President Woodrow Wilson made it a holiday in 1916.

June 19 (1865) - Juneteenth: Now a federal holiday (observed on June 20, 2022), this celebrates Union General Gordon Granger’s arrival in Galveston, TX, to announce the end of the Civil War, and the official freedom of all enslaved African Americans in former Confederate territories.

July 4 (1776) - Independence Day: Commemorates the passage of the Declaration of Independence by the Continental Congress. Nearly one third of all battles in the Revolutionary War were fought in New York State. Fort Niagara served as the headquarters for British forces on the Great Lakes and was the staging area for numerous raids by “Americans” who preferred to remain loyal to the British Crown.

The full content is available in the Summer 2022 Issue.

This first-of-its-kind monument was unveiled in
Buffalo this September.

Buffalo's contribution to this famous battle is probably not the version you have heard, but it's the true version.

Jesse Wallace Clipper: The Soldier and the Man

President Millard Fillmore's Dilemma of War, Peace and Slavery: The Case of Daniel, 1851

Ignoring the cries for human rights and basic human decency, President Millard Fillmore opted to support the Fugitive Slave Act in an attempt to prevent civil war and preserve the Union. 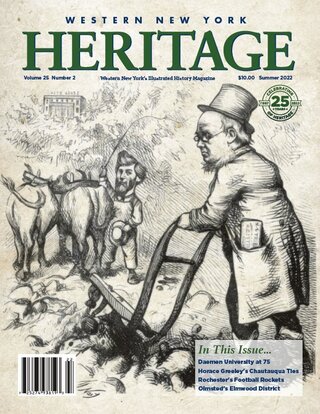 A visual survey of spans across the Niagara River, past and present.