A.M.&A.'s is long gone from Downtown Buffalo along with traffic on Main Street and retail shopping in general. In 1960, after nearly 100 years in the building that replaced the second American Hotel (see WNY Heritage's Winter 1999 issue), Adam Meldrum and Anderson moved across Main Street. They left behind the vast creaky wooden floors of the old building to occupy one of the most modern-looking stores in Buffalo. The building, covering half of a large city block, was the design of one of the premier New York City architectural firms, Starrett & Van Vleck. They were the designers of Saks Fifth Avenue, Bloomingdale's Lexington Avenue and Lord & Taylor's Fifth Avenue. In 1945, ten years after their initial unification of several building components, Starrett & Van Vleck perfected the composition.

The former J.N. Adam department store, one of the best pieces of modernism on Main Street, has been a major component of downtown streetscape for half a century. It presents a masterful play of abstract form, interconnecting horizontal and vertical elements with the sophistication of a Gershwin arrangement. Unified horizontal window bands and layered horizontal monochrome materials: travertine-like stone, buff brick banded with glazed buff tiles, subtly reinforce the linear precision of the composition. The crowning glory of the whole complex is the open roof of the Main Street component. A stark slab roof is raised on a repetitive series of stout concrete columns in-filled with plate glass, flooding the upper floor with natural light. This roof-top observation deck, one of the great interior spaces of the city, housed the Yankee Doodle Room restaurant.

The building is a celebration of urban life. The Eagle Street façade is prominently exposed, fronting on the M&T Plaza set-back. Its horizontal lines provide a complementary foil to the verticality of the Yamasaki tower. On the Washington Street elevation three earlier components designed by Buffalo architects: E.B. Green, 1892 and 1896, and Esenwein & Johnson, 1909, are well preserved.

Recently, while the current owner was in the process of establishing a reuse of the now vacant building, it was revealed the city was "moving ahead" with plans for the demolition of the whole complex to create a "shovel ready" site for some unspecified and likely non-existent developer. If there were a demand for such "shovel ready" sites on Main Street in Downtown Buffalo, why are three major sites now devoted to surface parking lots? Half of the block south of the Ellicott Square Building has been vacant for decades. The site of the old Federal Reserve at Main and Swan has been empty since that building was demolished in the late 1950s. And the Main and Seneca Street site awaits - "shovel ready."

To eagerly plan the demolition of this building, on simple speculation that something better will be built, is sheer madness.

The full content is available in the Summer/Fall 2003 Issue.

A Time for Change: Urban Renewal in Batavia

Buffalo is not the only Western New York city that has endured the pros and cons of urban renewal. Assistant editor David Neth examines its impact in Genesee County.

In 1843, Irish immigrant William A. Carland came to Buffalo from Boston to establish a factory for the manufacture of ready-made men's clothing.

Another Look: The Webster Block

As work on the HARBORCenter gets underway in Buffalo, we look back on the colorful history of the Webster Block. 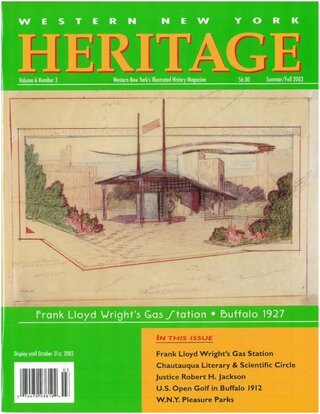