Athletes pose before the 1911 race.

For thousands of Western New Yorkers, Thanksgiving Day is about more than delicious feasts, family gatherings and football games — it also means the YMCA Turkey Trot in Buffalo. This year, 14,000 runners — myself included — will line up for the 118th annual trot, the oldest consecutively run footrace in the country.

The Turkey Trot of today, however, is a huge leap from the first-ever Turkey Day run in 1896, when six men lined up on a damp morning to run a muddy five-mile course. Harry Allison was the race’s inaugural winner. A few years later, the YMCA’s December 1901 newsletter reported: “Our Annual Cross Country Run this year … was one of great interest and enthusiasm… The men were all in splendid condition, the weather was ideal, the course in the best of shape for running and nothing, absolutely nothing, occurred to mar its success.”

In those days, and until the 1970s, the race attracted a small contingent of serious cross-country athletes, the fastest members of the local running clubs. In 1908, Allison fired the starting gun for 35 runners; F.J. Dlenzer emerged the champion, a full minute faster than his closest competitor. In 1937, 64 runners suited up for the race, while in 1943, Gil Hunt edged out 25 others by at least 100 yards.

Since its launch, the Turkey Trot has never missed a year. Despite two world wars, the Great Depression and other issues, the race has never canceled and continues to run rain or shine, whether it’s warm or bone-chilling cold. A 1938 article reported, “Racing over icy streets at a pace more suitable to an Indian summer day, and braving a continuous snowfall, Duane Zemper of Michigan Normal College blazed the trail in the annual Downtown Y.M.C.A. cross-country run yesterday.” More recently, in 2000, Delaware Avenue was covered by more than two feet of hard-packed snow just two days before the race. But come Thanksgiving morning, city crews had scraped the route clean, and 4,000 runners showed up undeterred.

Over the years, the route has changed as well. In 1897, the Buffalo Daily Courier reported the run would snake through Central Park and down Elmwood, Richmond and Pennsylvania avenues. Forty years later, the race took off from the Delaware YMCA and traveled down Delaware before ending at the Green & Wicks-designed YMCA Building at 45 West Mohawk Street. Today, we Turkey Trotters start at the same North Buffalo YMCA location and dash along Delaware, through Niagara Square to Church Street and finally up Franklin to a post-race celebration at the Convention Center and Statler City.

During the 1970s, the number of entrants began to increase as more recreational runners signed up. In 1978, the field exceeded 1,000, and by 1982, the race attracted 1,546 paid entries and an estimated 500 “unofficial” participants. Meanwhile, in 1972, the 75th annual race welcomed its first woman runner. Mary Ann Bolles was met with a round of applause when she crossed the finish line, and 25 years later, she and all of the previous winners were honored guests at the centennial race.

Known by a variety of names over the years, including the J.Y. Cameron Memorial Turkey Day Run, in honor of the former downtown YMCA physical director, the modern Turkey Trot still retains some of the competitiveness of its predecessors. The youngest overall winner was 15-year-old Anthony Diamond in 1944, while the youngest winner among female runners was 11-year-old Jacy Christiansen in 2004. (Her older brother, Jed, is the reigning 2012 champion.) The fastest time was set in 1989 by Orchard Park’s David O’Keeffe, with 23 minutes and 13 seconds, an incredible pace of 4:39 per mile.

Today’s YMCA Turkey Trot is also a fun run, as many participants routinely show up in an array of colorful, wacky costumes. Like many others in Western New York, I run it every year with my family. Say hello if you see me along the course!

The full content is available in the Fall 2013 Issue.

The Hispanic Heritage Council of Western New York shares images, past and present, of our region's rich Hispanic culture.

The Hispanic Heritage Council of Western New York shares images, past and present, of our region's rich Hispanic culture.

Anne White Carpenter: The Woman Behind the Wheel

The first fully equipped female chemist in the county devoted her life to empowering women, young and old.

Not Your (Great) Grandmother's Art Society: Reinventing the Buffalo Society of Artists

No longer a parlor pastime, the Buffalo Society of Artists is finding new ways to connect artists and the community. 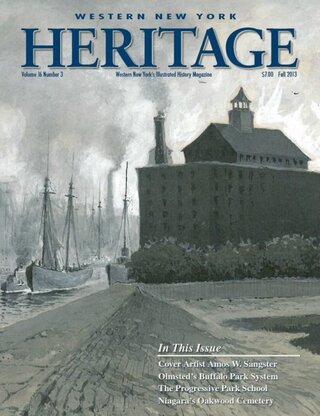 Matthew Biddle shows two examples of how technology is bringing history to a wider audience.