Western New York lost a true pillar of the community this past November with the passing of Robert J. Kresse.  As an attorney and long-time trustee of the Margaret L. Wendt Foundation, Bob was a tireless advocate for the region and its cultural treasures.  To list the success stories associated with his efforts would take far more space than we have here, but just take a look around Buffalo and the greater Western New York region. If you find a successful restoration, preservation or reimagining effort, then there is a good chance he was somehow involved.

Like so many of our colleagues, we at Western New York Heritage are proud to have had a very personal connection with Bob.  He was an unwavering supporter of our mission, and the Margaret L. Wendt Foundation has played a significant role in our early survival and our more recent successes, such as our 3-volume War of 1812 series (two volumes of which were funded by the Wendt Foundation).  Bob’s wife, Mary Ann, has been a long-time member of our board, and so everyone here considered him to be a member of the Western New York Heritage family.  We will miss his inspiring presence, as well as his warm and gentle demeanor.

We know we join all our cultural colleagues in saying we will do our utmost to honor his legacy by carrying on the work to which he was so dedicated.

The full content is available in the Winter 2021 Issue.

The events of the Buffalo Centennial Eucharistic Congress of 1947 drew over 500,000 people, making it the largest religious event held in Western New York.

What Does a Bass Drum Mean? The Buffalo Silver Band

What began as a small church band has evolved to become one of Western New York's most unique musical ensembles. 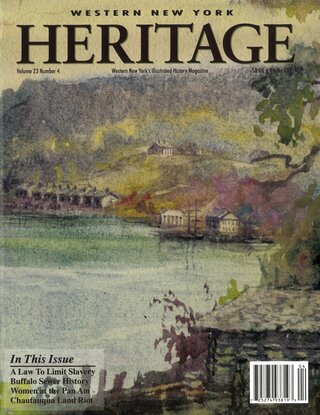