Detail of the north-facing center bay of 85 Genesee Street.

One of the most original and dramatic building designs of 1890s Buffalo was the structure at 85 Genesee Street, at the corner of Ellicott, now collapsed.  On a tiny, triangular lot, the architect placed an imposing, four-story building facade.  The building, with hardly any footprint to it, gave the impression of being a monumental structure.  It was theatrical architecture, a trope, like a metaphysical conceit yoking together apparent opposites.  At the acute angle of the triangular lot, the building came to a knifepoint edge, four stories high.

At street level, the facade seemed to be a symmetrical arrangement of three storefronts with glass transoms.  Taking a moment to note the vertical rhythms of the design, one sees that the other pilasters defining the center storefront are carried up through the rooftop cornice to terminate in twin chimneys.  The chimneys, in turn, become prominent, decorative elements of an improvised open pediment, focusing attention on the central skylight recess.  The width of the skylight is carried down through the double windows in the center of the lower floors.

Beneath the continuous leaded glass transom, the shallow point of the building held a sheltered exterior stairway to the upper level.  The custom-designed iron staircase was ingeniously fitted into half the bay.  At the base of the corner was the artist's name, proudly cast in iron: "F.W. Caulkins Architect."

If Franklin W. Caulkins had done nothing else in the city than this remarkable tour de force, his reputation as an artist architect should be secure.  Unfortunately in the fall of 2002, the building collapsed during a misinformed attempt to rehabilitate it.  The floor planes, essential structural components of the unusual design, were removed, leaving it without wind bracing.

Interior of the Fred J. Dorn jewelry store.  The store was flooded with natural light from the display windows, the luxfer glass transom and the plate glass door.  Shiny brass cages protected the storefront jeweler displays.  Dorn was the original tenant and occupied the building for over 40 years.

F.W. Caulkins was a prolific designer who made several important contributions to local architecture. He was born in Hartford, CT, in 1855.  He demonstrated an aptitude for architecture at an early age.  Before he was 20 years old, architect Charles Coots of Rochester, NY, employed him.  He first worked in Buffalo in 1875 in the office of Milton Beebe.  In Beebe's office, he worked on the Hayen cast iron building at the corner of Main and Seneca streets and on the Nelson Holland residence at Delaware and Bryant streets.

In 1878, Caulkins established his own Buffalo office.  It was the same year he married Jennie Louise Van Slyke of Rochester.  His office was in the Townsend Block at Main and Swan streets.  At the age of 25, Caulkins was the designer of The White Building, a seven-story office building commissioned by the eminent local physician, Dr. James P. White.  The building, as with the current White Building, extended from Main Street through to Erie Street.  It was billed as "fireproof" and was called "the first first-class office building in Buffalo, and for many years the only one."  In 1906, the present, taller White Building replaced it on the same footprint.  The present building retains some of the case iron columns of the earlier building on the Erie Street facade.

The original White Building on Main Street south of Erie Street in the early 1880s.  The unusual footprint of the building, with major facades on two streets, used Joseph Ellicott's street plan to advantage.

On the same city block, Caulkins was also the architect of the Chapin Building; a six-story office building on an odd-shaped lot at the corner of Pearl and Swan streets.  It had an unusual three-story octagonal window oriel at the corner.  The Chapin Building was demolished in 1926 for the expansion of the Manufacturers & Traders Bank.

It was in the early 1880s that Caulkins transformed the 1833 Unitarian Church into an office building for client Stephen Austin.  The old church, once visited by Abraham Lincoln, was taken down and rebuilt from the first floor up and was extended in length along Eagle Street.  Thus, the entire landmark Austin Building should be considered a Caulkins design.

The Austin Building, at Franklin and Eagle streets, originally had twin rooftop pediments on the Eagle Street side.

Frank Caulkins, as he was familiarly known, became proficient in the acoustical design of churches.  He worked on improvements to several Buffalo churches that are no longer standing.  A major piece of his own original church architecture that survives in Buffalo is the Prospect Avenue Baptist Church at the corner of Georgia and Prospect in the West Village Historic District.  The building contains several innovative features, including a mechanically expandable sanctuary.

In 1882, Caulkins relocated to Minneapolis, MN, and practiced architecture there until 1885, when he returned to Buffalo and reestablished his office.  This time he located in his own Chapin Building.  Caulkins remained in Buffalo until 1903.  His father, Dr. Russell Caulkins, a practitioner of homeopathic medicine, became a resident of Buffalo in 1885.

Caulkins was also a designer of residential architecture.  Several of his houses survive.  In 1882, he designed the house at 415 Franklin Street for himself.  Complete with rooftop cresting and finials, the house in an orchestration of details carried out with the aplomb of a master.  The Buffalo Architectural Guide accurately identifies it as "one of the best examples of the Queen Anne Stick Style in the city."

Caulkins built this house for himself at 415 Franklin Street, Buffalo

Three, and probably more, of his houses survive on Symphony Circle.  No. 69 was built for Malcolm J. McNiven in 1878.  It was pictured in the 1915 Beautiful Homes of Buffalo book.  The client for the brick house at No. 51 was Mrs. Ira S. Bennett; and the frame house at No. 55 was designed for Frank Porter in 1880.

The house at 741 West Ferry Street with complex massing and a prominent Elizabethan gable was designed for a James H. Smith.  It, too, was pictured in the Beautiful Homes of Buffalo book, then as the home of Mrs. Susan Sizer.  It was demolished for an apartment building.

Originally built for James H. Smith, this grand house at 741 West Ferry Street was listed as the home of Mrs. Susan Sizer in the 1915 Beautiful Homes of Buffalo book.

Gable detail of the house at 471 Linwood Avenue

Caulkins remodeled an old frame house on Linwood Avenue at the southeast corner of Ferry Street for E. B. Smith, a real estate speculator.  The building has lost much of its detail but the Elizabethan attic oriel remains as an attractive Caulkins signature.  The house is noteworthy as the residence of Anna Katharine Green and Charles Rohlfs in 1887.  It was additionally important, according to Austin Fox, as the longtime residence of Henry W. Hill, the New York State senator who authored the four-volume history of the Municipality of Buffalo in 1923.

Caulkins also designed a large and muscular brick and stone Romanesque Revival house for James Forsythe at 410 Delaware Avenue.  It stood next door to the Sternberg Mansion and was demolished by the Buffalo Club in 1966.

On the other side of the Sternberg Mansion, across Edward Street, a house by Caulkins survives obscured by a modern storefront building.  The house was built as the home of Thomas Ramsdell, who served for many years as the director of the Buffalo Public Library.

In 1888, a magnificent Shingle Style frame church, designed by Caulkins, was dedicated as the Maple Street Baptist Mission Church.  With a large octagonal tower, it occupied the corner of Maple and Virginia streets in the Fruit Belt district.  It stood opposite the historic 1856 German Lutheran Seminary on Maple Street.  Both buildings were demolished in the early 1980s.

Courtesy Historical Society of the Tonawandas

Although most of Frank Caulkins' local buildings have disappeared, substantial contributions remain in the Prospect Avenue Baptist Church and the residential buildings.  Given the prolific and varied output of his years in Buffalo, it is likely that other buildings of his have survived.  Non are, however, likely to be as dramatic as the photographic studio that once stood at 85 Genesee Street.

Special thanks are due to Lynda Boehm of Texas, the architect's granddaughter, and Joan Sambrotto of Buffalo, for making their extensive research materials available to Western New York Heritage.

The full content is available in the Spring 2007 Issue.

Commissioned for the opening of the new Courier-Express Building in 1930, the mural painted by Charles Bigelow and Ernest Davenport is a significant piece of Buffalo's rich journalistic and artistic history. 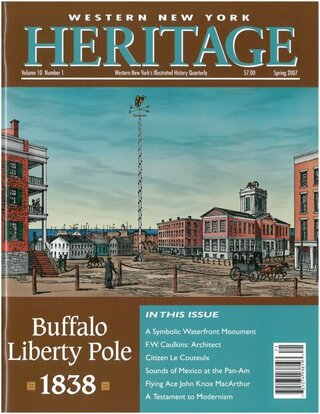