Detail of the Buffalo Waterfront from Davey’s Map of the City of Buffalo 1872 showing the Elevator District.

The eminent British architectural historian Peter Reyner Banham, in his book A Concrete Atlantis focused international attention on the concrete cylinder silo survivors of Buffalo’s grain elevator industry. Banham amply demonstrated how the stark functionalism of specific elevators on the Buffalo waterfront served as inspiration for the master architects of European modernism in the early 20th century. Walter Gropius, Erich Mendelsohn and Le Corbusier illustrated their manifestos with photos of Buffalo elevators. A half-century later Banham viewed the monumental concrete structures along the Buffalo River “in abandonment and death” and said they evoked for him “the majesties of a departed civilization.”

There was, however, another significant chapter in the history of functionalism that preceded Banham’s electrically powered concrete machines. The giant steam-driven wooden grain elevators of Buffalo’s waterfront in the second half of the 19th century were a comparatively brief phenomenon in the history of architecture; but they made Buffalo a great port. They included giant structures that were completely beyond the scale of ordinary buildings. At a time when masonry buildings were limited to six or seven stories in height, these wooden wonders rose to heights that would not be reached until the steel-framed high rises of the 1890s. If Louis Sullivan’s Guaranty Building was properly termed a skyscraper, so too should have been several wooden elevators built 30 years earlier. They are all long gone now. Most have faded from the scene for over 100 years.

They were dark, gritty and ungainly monumental hulks. But they were more than mere buildings. They were machines – noisy, steam-driven, smoke-belching machines. In 1912, when the wooden elevators were being rapidly replaced with concrete structures, historian Frank Severance commented on the aftermath of Joseph Dart’s mechanized steam elevator: “In the later years, gigantic structures, o fa size and capacity undreamed of by their inventor, became the characteristic feature of our waterfront. A considerable volume would be required to picture all of these uncouth but potential piles – or even all of those that have burned.”

The wooden elevators were in constant danger of fire from steam boiler sparks and combustible grain dust. Many elevators burned and were immediately rebuilt on an even larger scale. Most of the Buffalo elevators in the 19th century were designed by engineer Robert Dunbar and were mechanized with machinery designed by him and manufactured in his Eagle Iron Works located in Buffalo’s present Cobblestone Historic District.

Joseph Dart erected the first steam-driven elevator in the world on the Buffalo River in 1842. That building had the capacity to store an elevated 55,000 bushels of grain. Fifty years later the massive wooden Coatsworth Elevator, later known as Kellogg B, had the capacity of story 2.5 million bushels.

Joseph Dart’s original elevator, located at the entrance to the Evans Ship Canal, burned in 1863. The Bennett Elevator replaced it in 1864. The basic elements of an elevator are clearly discernable here. The windowless area set on a high stone foundation is the grain storage space. The marine tower facing the three-master cargo vessel is supported on timber stilts. It housed the “marine leg,” Dunbar’s moveable conveyor belt, which descended into the hold of the vessel to draw up the grain. The leg was retracted into the tapered rooftop tower when not in use. The barn-like form of the Bennett with a rooftop clerestory head house is an expansion of a common medieval timber frame structure, which was ultimately derived from an ancient Roman basilica form.

The Bennett Elevator fronted 150 feet along the Buffalo River and rose to a height of 130 feet. It was demolished in 1912.

A medieval European precedent to the marine tower might be seen in the 90-foot tall, cantilevered hoist for unloading ship cargoes in the port of Gdańsk.

Located on the Evans Ship Canal, just around the corner from the Bennett Elevator, the Evans was originally built in 1847. It burned and was immediately rebuilt in 1863, and was again burned and rebuilt in 1864. The elevator then survived to be recorded in a famous painting by Charles Burchfield in 1939. The above figure shows the three-masted schooner Superior of Detroit at berth in the Evans Ship Canal and the open swing bridge that allowed the tall-masted vessel to enter the canal.

The Watson Elevator, center, was the prominent “flagship” of the Buffalo grain elevators. It was built in 1862 and occupied a triangular island at the juncture of the Buffalo River and the City Ship (Blackwell) Canal. The famous Central Wharf is visible in the distance at the left. At the time of this photo there were more than 70 grain forwarders in Buffalo, all with offices in the Central Wharf.

This is a rare early photo of the Watson. The structure measured 176 feet to the ridge and had an observation deck above the ridge. The Guaranty Building is only 150 feet high.

The Watson’s observation deck provided an overview of the waterfront that was over 100 feet higher than that of the Buffalo Lighthouse. The smokestack for the steam engine of the Watson was contained within the body of the building, with the entire edifice supported on timber pilings. The building burned in 1907. The site was excavated for a turning basin in 1912.

An 1870s overview of the Buffalo River elevator district from the top of the Watson Elevator.

The Brown Elevator, built in 1866, was located on the south side of the Buffalo River facing the Central Wharf. The tapered brick smokestack, 130 feet high, stood free beside the Brown like an Egyptian obelisk. Several named elevators can be seen in the distance including the Richmond and the Sturges, which were opposite the foot of Main Street. The Richmond, built in 1862, survived until 1915.

In the above image, one can see the diagonal line of buildings down the east side of Main Street to the Buffalo River. On the far side of the river loom the giant otherworldly hulks of wooden elevators. The Sturges at the left, at 140 feet tall, towers high above a domed observation deck visible on top of the 1830s Commercial Block at the foot of Main Street.

There are several elevators grouped at the right: the Excelsior, an oddly shaped transfer tower, the Hazard Elevator and the Fulton tower on the Blackwell Canal.

The Reed is shown “parked” in the line of commercial buildings along the Atlantic Dock on the Buffalo River. It is completely out of scale to its neighbors. Originally built in 1847, it burned and was rebuilt in 1859 and burned again in 1874. The Atlantis Dock ran between the Commercial Slip and the Evans Ship Canal. The site of the Reed is now part of the relocated Buffalo Naval and Military Park.

The two elevators at the left were located at the foot of Indiana Street. Both were rebuilt in 1863 after being destroyed in a spectacular fire September 9, 1862. They were on the site now occupied by the D.L.&W. train shed of the NFTA.

This landside view of the C.J. Wells Elevator from Illinois and South Park streets presents a dramatic play of light and shadow. The magnificently precise and monumental freestanding smokestack would soon be obsolete. The elevator rebuilt in 1891, burned a third and final time in 1912.

Downstream view from the Michigan Street Bridge of both sides of the Buffalo River, ca. 1895.

The grit and romance of the wooden elevator era are evident in this view of a canyon of commerce. The C.J. Wells elevator is recognizable at the right from the previous photograph.

In 1890 the Niagara consisted of three ironclad wooden behemoths. They were located on the Buffalo River at the “Dead Creek” entrance to the Ohio Basin. The structure at the left was built in 1869. The “B” elevator was built in 1887, The complex has a storage capacity of two million bushels of grain.

For this large historical painting, focused on Dart’s Elevator, Leonard F. Tantillo used ad 1840s view by Edwin Whitefield and contemporary building property maps to construct an elaborate model of the scene. Trained as an architect and experienced as an architectural illustrator, Tantillo’s body of work in New York State emphasizes the importance of regional history. He has refined his medium as a powerful storytelling instrument.

The full content is available in the Spring 2008 Issue.

At the Water's Edge: Paintings and Drawings by Mildred C. Green

The first solo exhibition of this artist’s work highlights the business and beauty of the region’s waterways.

Death by Fire and Water: The Steamship Erie Disaster

The Erie Canal opened the West-- but getting there could be a deadly gamble, as this 1841 tragedy demonstrated.

A donated painting provides the focal point for a collaborative project with Buffalo State graduate students. 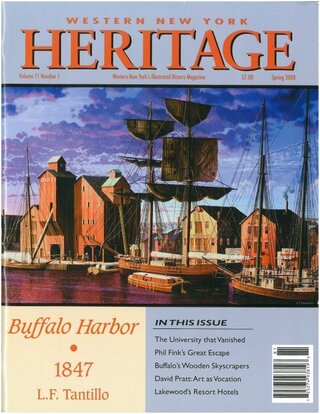