Frederick Law Olmsted and his partner Calvert Vaux designed the 56-acre park originally known as The Parade on Buffalo's East Side in 1873.  So called because it contained a parade ground, the park's elevated location held a view of the city and the lake.

By 1896, the Olmsted firm redesigned the area-- renamed Humboldt Park-- most notably replacing the parade ground with a series of geometric water features.  First was a wading pool, a large basin of water about 550 feet in diameter with a sandy bottom, which attracted scores of youngsters happily splashing away.  Another pond featured a large fountain, while a third pond was filled with water plants.  A bandstand was also erected, where concerts were conducted on summer evenings.  An idyllic setting just as Olmsted and Vaux intended, one part of the original three-point city park crown that also included Delaware and Front parks.

A distinctive Omstedian feature of Humboldt Parkway, connecting The Parade with Delaware Park, was the wide, tree-lined median.  However, a swath of alleged progress tore through this sun-dappled urban oasis in the 1960s with the building of the Kensington Expressway.  In the name of easier access to the suburbs, this major thoroughfare, which opened in 1967, disrupted the city neighborhood as it bulldozed its way through Humboldt Park.

Herewith are glimpses of Humboldt's former pastoral glory, along with the signs of the six-lane intrusion that dead-ended nearly a century of the original Olmsted oasis.

A drive along Humboldt Parkway at Northland in 1953.

Sign up to stay informed about future updates and promotions.  We will never sell your information.

The bridle path in Humboldt Parkway at Girard in 1935.

Humboldt Parkway at Riley Street, looking toward the Buffalo Museum of Science in 1954.

"Rows of tree stumps stand as forlorn reminders of the once picturesque center mall on Humboldt Parkway near Kingsley-- they're coming down in the name of progress to make way for [the] Kensington Expressway. . ." reported the Courier-Express on March 3, 1960.

Humboldt Parkway, at Kensington and Main, 1935. The Shell gas station at left was replaced by Robert Hall Clothes in the 1950s. Mount St. Joseph's building with cupola was demolished in the mid-1960s.

The enjoyment of a summer day in 1906 in the wading pond of Humboldt Park.

Aerial views before and after: Humboldt Parkway at left in 1927 becomes the Kensington Expressway as seen in 1995 at right.

The full content is available in the Summer 2005 Issue.

Gates Circle has witnessed, not only a name change, but also a whole renovation in its lifetime.

These two houses sit right across the street from one another and were both home to noteworthy families.

Many of the homes along Buffalo's famous parkways and circles have rich histories and this home on Soldier's Place is no different.

The Rise, Decline and Renewal of Olmsted’s Elmwood District

Olmsted’s bicentennial provides an opportunity to examine the impact of his Buffalo park system on the development of one of the city’s neighborhoods. 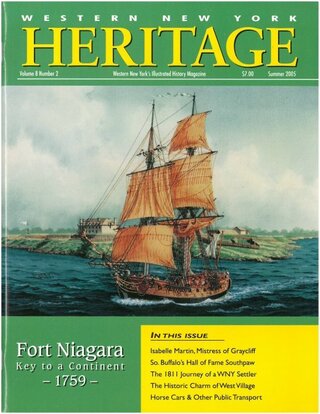