While many of our articles focus on the bustling town and cityscapes of our urban environs in Western New York, in reality the majority of the region is primarily comprised of stunning rural landscapes with an abundance of animal inhabitants.

One such area is located way up north—at the easternmost edge of Niagara County. Here, a streak of red along the underbrush signals the quick flash of a fox tail as it dashes across the grassy meadow on a solitary quest in the moonlight. The gaggle of geese floating a few feet off the shoreline of Lake Ontario sound their cacophonous honks in a near-deafening midnight symphony. A band of coyote searches for hidden warrens, hoping to uncover a colony of rabbits for their evening meal, while herds of deer wander the woods past a manmade monolith and ornamental ruins.

A drawing of the proposed Thirty Mile Point Lighthouse, 1873

The backdrop for this happy hunting ground is a 510-acre wildlife wonderland called Golden Hill State Park. Presumably named after an erstwhile island off the coast, once covered in goldenrod, the monolith mentioned above is the Thirty Mile Point Lighthouse, built in 1875. Perched on the shore of Lake Ontario, it warned sailors of the nearby shoals. Further east are the remains of the Drake House, the summer home once owned by Robert H. Newell, owner of the Newell Shirt Factory in nearby Medina. Occasionally, a human can be seen hiking the forested footpaths. Why not take Emerson’s advice and “live in the sunshine, swim the sea, drink the wild air” and perhaps take some time to wander the woods of the golden hill on the great lake.

The full content is available in the Winter 2022 Issue.

At the Water's Edge: Paintings and Drawings by Mildred C. Green

The first solo exhibition of this artist’s work highlights the business and beauty of the region’s waterways.

Three centuries ago, French traders established this small, but important site in what is now Lewiston.

Erie Beach Amusement Park: The Lore and The Legacy

We take a look at the origins—and remnants—of what was once called “Buffalo’s Two-Million-Dollar Playground.”

We examine the environmental efforts of this unassuming Buffalo jeweler to reclaim the waterfront of the city he loved. 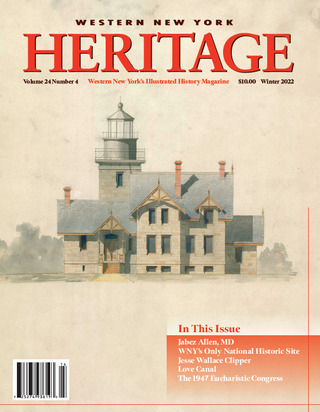 Endnotes: That Old Saying about Hearts and [Shirt] Sleeves. . .

Medina’s Newell Shirt Factory once boasted the rich and famous among its clientele.  Today, the building has been reimagined as a multipurpose space.

The Lafayette Violets adhered to their school's motto: Be Strong and of a Good Courage.