As a medical doctor and a military colonel, Cyrenius Chapin's reputation often preceded him along the Niagara Frontier. Erie County Historian Doug Kohler looks at the influential character.

The full content is available in the Winter 2010 Issue.

The following are excerpts from a Courier-Express article from July 16, 1939 by Robert B. Boltwood.

President Millard Fillmore's Dilemma of War, Peace and Slavery: The Case of Daniel, 1851

Ignoring the cries for human rights and basic human decency, President Millard Fillmore opted to support the Fugitive Slave Act in an attempt to prevent civil war and preserve the Union.

We examine the environmental efforts of this unassuming Buffalo jeweler to reclaim the waterfront of the city he loved.

The Grand Enterprise: LaSalle on the Niagara

The story of La Salle's exploration of the Great Lakes is well known, but many mysteries surround his ship, the Griffon. The first part of this two-part story presents new interpretations of this storied ship's design. 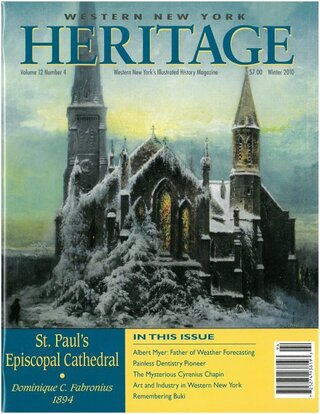 Ten Paces in the Wilderness: Hamilton, Burr, Morris and the Holland Land Purchase

The history of Western New York’s European settlement is fraught with interconnected events and relationships, including some between several well-known characters.

For I Never Would Have Surrendered: The 1886 Fenian Invasion of Canada

After fighting to preserve the Union in the American Civil War, hundreds of Irish immigrants were eager to win their homeland's freedom from the United Kingdom. Although the Fenian Brotherhood failed in its mission to capture Canada, the cross-border raids would have a lasting impact.